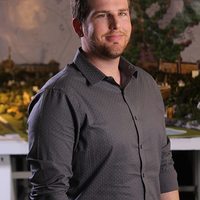 My name is Andrew Towe, I am a Producer and DP (edit and color as well) from Los Angeles. I recently moved to the East Coast to expand my production company and launch several IPs. My company, Andrew Towe Creative, is a production company that handles various sizes of video, photo and film projects. Recent work was Twilight Zone Documentary, “Remembering Rod Serling” for CBS & Fathom events for a nationwide theatrical release and DVD/Blu Rays.

I have recently shot the feature film documentary of The Twilight Zone 60th Anniversary for CBS & Fathom events Nationwide, including The Twilight Zone Blu Ray special features for CBS Home Video. On top of that producing and shooting an IP called "Bunny" created by celebrity photographer Patrick Ecclesine & started a new Production company that focuses on real events and food/traveling, called Running around Productions: www.runingaroundproductions.com

Bio: In recent years, Andrew has had the opportunity to work with major professionals on a variety of film and media projects including Universal’s “Aliens Ate My Homework” & sequel “Aliens Stole My Body”, Greg Strasz’ “Megan”, and Ana Barredo’s “The Year I Did Nothing”. His film production experience includes stints at Lay-Carnagey Entertainment and with prolific Hollywood production designer Carol Wood coordinating and managing multiple departments including the conceptual art / storyboards team, scenic construction, effects miniatures, props, camera department and production management. His latest endeavor is Andrew Towe Creative, a new firm under his direction which focuses on TV/Film and photography services for TV, Full Feature Films, Documentaries, digital media, and print/promotional projects. Recent credits under his new firm include producing, cinematography and photography on a variety of projects including director Ana Barredo’s feature film “The Year I Did Nothing”, Producer Steve Ecclesine’s “So You Want to be a Producer” & “Have you heard about Greg?”, and multiple Star Trek feature-length documentaries for director Roger Lay, Jr. Andrew’s professional experience also extends to interactive multimedia and computer animation projects. Andrew holds a business degree from The Art Institute, as well as Editing Software Engineering Certification from University of New Mexico, and Photography/Cinematography certifications from Pasadena College.

Andrew T is a new user and doesn't have any reviews yet.