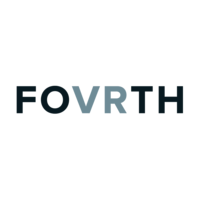 Fovrth Studios is a New York based production studio specializing in documentary content for television, film, and new media. 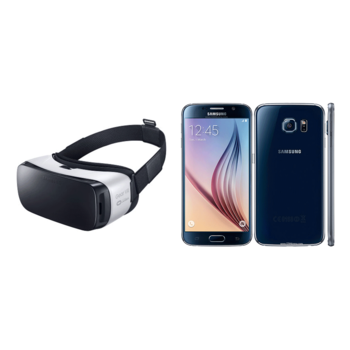 Showcase and watch 360 videos with these 2 Samsung products. 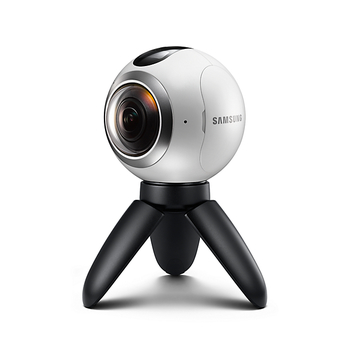 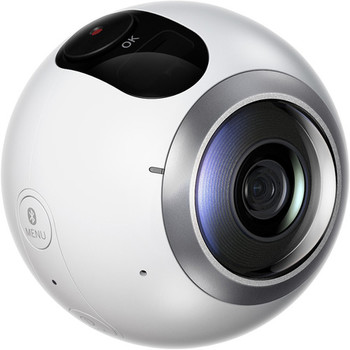 Record and capture 360-degree videos and images with the Gear 360 Spherical VR Camera from Samsung. This travel-friendly device is equipped with dual 15MP fisheye lenses that enable users to capture hi-res (3840 x 1920) 360-degree videos and 30MP still images. Each of the Gear's lenses capture 180-degrees horizontally and vertically, allowing you stitch together a seamless 360-degree view of the world around you. You can also use just one of the Gear's lenses to capture a wide-angle video at 2560 x 1440 resolution or a 5MP still image. In addition to shooting vivid day images, the Gear 360's bright, f/2.0 lenses enable the camera to work in low-light environments. To help with staging, the Gear 360 comes with a mini tripod and can also be used with optional adjustable tripods, such as GorillaPods.

Dual Lenses
The Gear 360's front and rear lenses capture 180 degrees horizontally and vertically, allowing you to create a complete 360-field of view

Hi-Res Details
Regardless of what you're shooting, the Gear 360 can capture it in either 3840 x 1920 high-resolution video or as a 30MP photo

Outdoor Friendly
Thanks to its portable design, you can take the Gear 360 with you, no matter where you're going

Easy to Use
Use the 360 with either your smartphone or PC to shoot, stitch, edit, and view your image or video before easily sharing it online 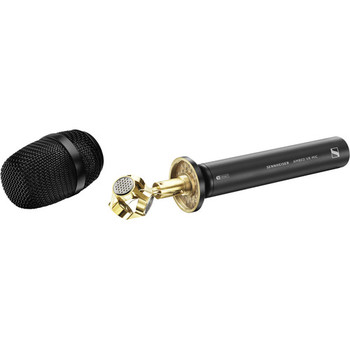 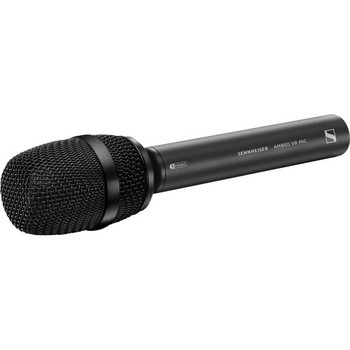 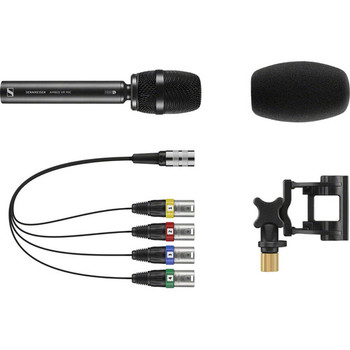 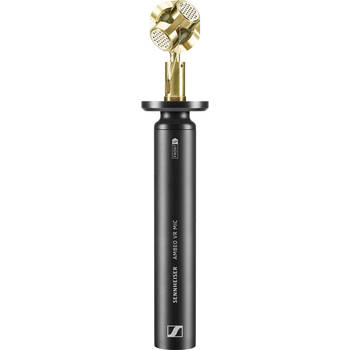 Designed for 360° immersive applications, the Sennheiser AMBEO VR is a microphone intended to bring the full vision of VR content creators to life in all its four-channel glory. Indeed, the microphone utilizes four KE 14 capsules situated in a tetrahedral arrangement to ensure that from wherever you're standing, the AMBEO will record the surrounding audio in a spherical manner, resulting in true Ambisonics recordings.

The science behind these principles is a bit arduous to lay out in the space provided for this description (indeed, multiple dissertations have been written about the Ambisonics format—developed by the British National Research Development Council in the 1970s); the principles are, however, of interest to the VR community, which utilize the technique to capture truly immerse aspects of any given sonic picture, giving you the left, right, bottom, top and center of the image in a way especially suited to the VR experience.
To help in working with the resulting audio in post-production, the microphone comes with a format encoder that will work in AU, AAX, VST, and standalone formats. Also included are a Rycote suspension mount, a split-cable designed to connect the microphone to four separate XLR terminations, and a windshield.

Capturing the VR Experience
The AMBEO VR Mic has been developed in cooperation with VR content producers and fine-tuned in conjunction with participants from across the audio and VR communities. Thus, the mic caters exactly to the needs of VR content creators, facilitating the audio capture of any location, and enabling the listener to be immersed in a way commensurate with the visual component of the VR experience.

Ambisonic Capsule Structure
The AMBEO VR Mic is an Ambisonics microphone fitted with four matched KE 14 capsules in a tetrahedral arrangement. This design allows you to capture the sound that surrounds you from a single point. As a result, you get a fully spherical, Ambisonics picture to match VR video/spherical 360° content. 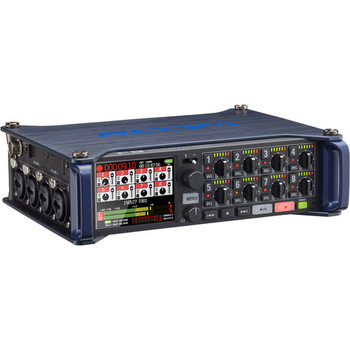 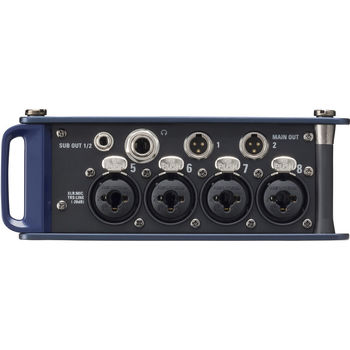 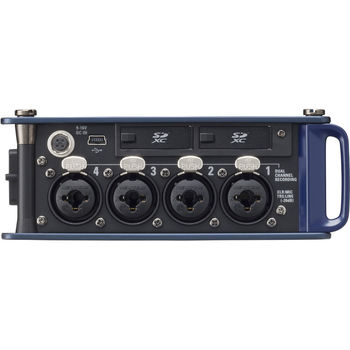 The Zoom F8 Multi-Track Field Recorder is designed for professional and enthusiast recording applications on set and in the field, including music, filmmaking, and electronics news gathering (ENG). Designed to be carried by a shoulder strap or in a bag, the unit features eight analog input channels with lockable XLR/TRS combo jacks that provide +75 dB maximum input gain, and support for +4 dB inputs with an EIN of -127 dBu or less. It can record up to 10 tracks simultaneously (channels 1-8 plus a stereo mix), or up to eight channels when recording at the A/D converter's maximum 24-bit 192 kHz resolution.

Alternatively, you can perform dual-channel recording of separate files at lower volume levels to ensure you have backup recordings to use when unexpected loud noises distort the primary recording. A newly designed limiter provides up to 10 dB of headroom. The unit supports SMPTE time code input and output. Included in the outputs is a powerful 100 mW + 100 mW headphone jack, as well as the MAIN OUT 1/2 and SUB OUT 1/2 jacks so you can send the audio signal to a video camera or other device while monitoring with headphones.

The unit's internal mixing capability enables flexible routing, and the inclusion of individually selectable +24V/+48V phantom power ensures you can use your favorite condenser microphones.

Power to the recorder can be supplied in one of three ways: via AA batteries, an AC adapter, or a 9 to 16V external DC power supply. Two SDXC card slots can be used simultaneously for recording even longer sessions, and can also be used as card readers when connected to a computer via USB.
When operating via USB, the unit can be used in a 2-in/2-out configuration as well as an 8-in/4-out audio interface (driver required for windows). A built-in slate mic allows you to make voice memos and the unit's slate tone can be used to confirm specific levels.

Among the most innovative features of the recorder is support for the company's interchangeable microphone capsules.

Audio Resolution
Records up to 192 kHz at 24-bit resolution

Simultaneous Recording
Records up to 10 tracks simultaneously with channels 1-8 and a stereo mix (left and right). Up to eight tracks can be recorded at a sampling rate of 192 kHz

Supports SMPTE Timecode I/O
Uses a high-precision oscillator that enables the generation of accurate time code with a discrepancy of less than 0.2 frames per 24 hours

Three Possible Power Supplies
Can operate on AA batteries, an AC adaptor, or a 9 to 16 V external DC power supply (not included) with automatic switching between power supplies

Two SDXC Card Slots
Allows for SD card recording, and the use of SDXC cards enables extended recording capability. The unit can also be used as a card reader by connecting it to a computer via USB 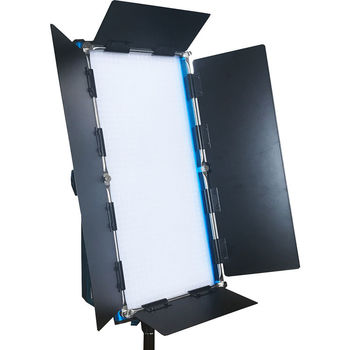 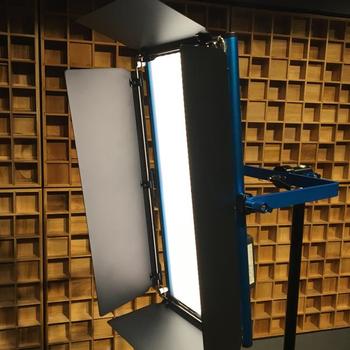 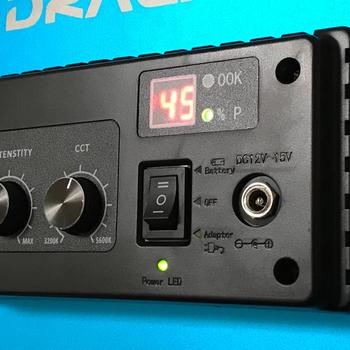 Featuring a unique folding design and dual-board LED panel, the LED1000 Silver Series Daylight LED Light with V-Mount Battery Plate from Dracast weighs just 4 lb and is an ideal choice for the studio or location work where color accuracy, control and flicker-free output are of major importance. The LED1000's daylight balanced output is well suited for outdoor work or color matching HMI fixtures, while its high CRI of 95 renders colors with precision and fidelity. Dimming from 100-0% is conveniently done with a back-panel knob that adjusts the output with negligible color shift. The low electrical draw of just 58W means a timely return on your investment.

The durable anodized aluminum frame is supported by an sturdy, U-shaped yoke with locking knobs on each side and a standard 5/8" receiver. This LED1000 can be used worldwide thanks to its included 100-240 VAC power adapter. You can also use the onboard V-Mount battery plate with optional 14.8 VDC batteries when mains power is unavailable. Accessories include optional 4-way barndoors for contouring and control of the LED1000's 45-degree beam angle. A carrying case is included.

Drop off and pick up went smoothly!

We were very happy with the rental. The client dropped off on-time, and took good care of our gear!

Excellent communication and took great care of the gear. I look forward to renting with them again!